Find us on Google+
BOYS & GIRLS CLUB OF EAST AURORA
The difference between former and current Club kids? A few more years and a little more wisdom. Club alum are making a difference in this Club and community. They volunteer, lead our Club, and financially support our current programs. They share a common bond through the Club Experience and passion for the Boys & Girls Club mission.
​

Past Wall of Fame Honorees 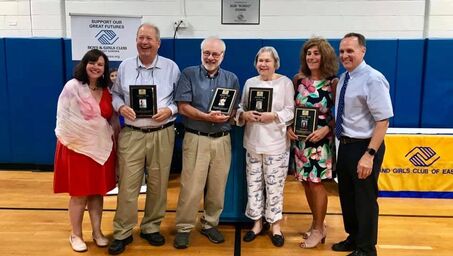 Our next Induction to the Boys & Girls Club of East Aurora Wall of Fame will be July, 2021! Watch for details on how to nominate a former Club member who was impacted by the Club and has gone on to impact their community and continued their support of the Club!
​Alumni Spotlight
The Power of Giving Back
When I was growing up Club kids were called Club Rats! Every day during my childhood I would walk to the Club after school. Starting in Clement Hall and moving to the new building after construction. I would play in the Games Room, hang out in the Teen Room (once I got old enough), and play all the intramural sports and activities that Potts (then eventually Neil and Stacy) would run. I played on the Basketball team, went to Camp Ska-No-Ka-San and eventually become a ‘JC’ or Junior Counselor for a year. The Boys & Girls Club was (and still is!) a safe, welcoming place to go to keep out of trouble, have fun, learn how to be a team player and just be a kid! I'm fortunate to have a husband who was also a Club Rat, a JC and Counselor at Camp Ska-No-Ka-San. Odds are pretty certain our child will eventually be a Club Rat and go to camp too! I can't think of a better reason to join the Alumni Association! I now have the chance to help in a way that will ensure my child and other children in our community can have the same experiences I had. ~Lisa Liedke~